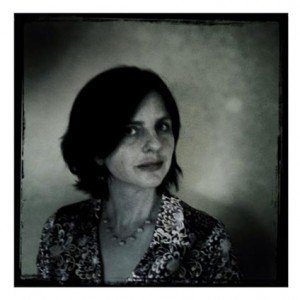 The artwork of Alison O’Donoghue can be described as contemporary folk art.

Partly naïve, sometimes illustrative, at times cartoony, with some of her pieces being heavily patterned. Her paintings are mostly playful with creatures and people that are quite often glowing with life… awash in dimensional color and shade in a mostly two dimensional world. In many of her paintings, she combines everyday objects such as; cups of coffee, fruit, plants, humans, birds and odd, made up animals, into a fluid motion of interaction of intertwined shapes. The playful next to the sinister, give the paintings a sense of humor and the complexity of an unfolding story.

It’s the relationships between these creatures and objects that is most intriguing to viewers. A dog balances three oranges on his nose, while a woman supports a man who is balancing like a gymnast on one of her raised hands. She herself is standing on a dog/horse/human creature who is smelling the aroma of a latte directly under her nose. On one of these creatures pointed ears perches a bird, eyeing a nearby bird with disdain. That bird is supporting on its back, a large bowl of fruit which supports a teakettle. And so it goes, each image interlocking with the next like one chapter merging into another into a grand story of everyday life.

In her larger work, Alison seems to have no intention of leaving a space unfilled or unpopulated as the figures become more of an overall pattern. It gives the viewer the feeling of looking at vines overtaking the world inside the painting in a kind of beautiful invasive force of nature.

In her smaller work, she is far more likely to have isolated central figures engaged in some kind of psychological situation. A darker story may be driving the figures in the painting. The scene is a mystery to be examined with no firm conclusions.Yet in her even smaller artwork, she may paint single whimsical cups of coffee, fruit or animals with cheerful mischief.

With her purely patterned work there is only implied references to figures. With a push and pull of negative space and positive shape, the viewer enters the world to visually play in a writhing mass of life.